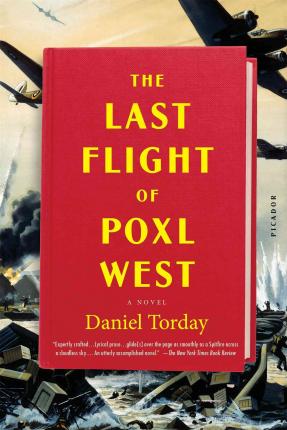 The Last Flight Of Poxl West

A “NEW YORK TIMES BOOK REVIEW “EDITORS’ CHOICE NAMED A BEST BOOK OF THE YEAR BY THE “PHILADELPHIA INQUIRER ” A stunning debut novel from award-winning author Daniel Torday, in which a young man recounts his idolization of his Uncle Poxl, a Jewish, former RAF pilot, exploring memory, fame, and storytelling.Poxl West fled the Nazis onslaught in Czechoslovakia. He escaped their clutches again in Holland. He pulled Londoners from the Blitz s rubble. He wooed intoxicating, unconventional beauties. He rained fire on Germany from his RAF bomber.Poxl West is the epitome of manhood and something of an idol to his teenage nephew, Eli Goldstein, who reveres him as a brave, singular, Jewish war hero. Poxl fills Eli s head with electric accounts of his derring-do, adventures, and romances, as he collects the best episodes from his storied life into a memoir.He publishes that memoir, “Skylock,” to great acclaim, and its success takes him on the road, and out of Eli s life. With his uncle gone, Eli throws himself into reading his opus and becomes fixated on all things Poxl.But as he delves deeper into Poxl s history, Eli begins to see that the life of the fearless superman he s adored has been much darker than Poxl let on, and filled with unimaginable loss from which he may have not recovered. As the truth about Poxl emerges, it forces Eli to face irreconcilable facts about the war he s romanticized and the vision of the man he s held so dear.Daniel Torday s debut novel, “The Last Flight of Poxl West” beautifully weaves together the two unforgettable voices of Eli Goldstein and Poxl West, exploring what it really means to be a hero, and to be a family, in the long shadow of war.”